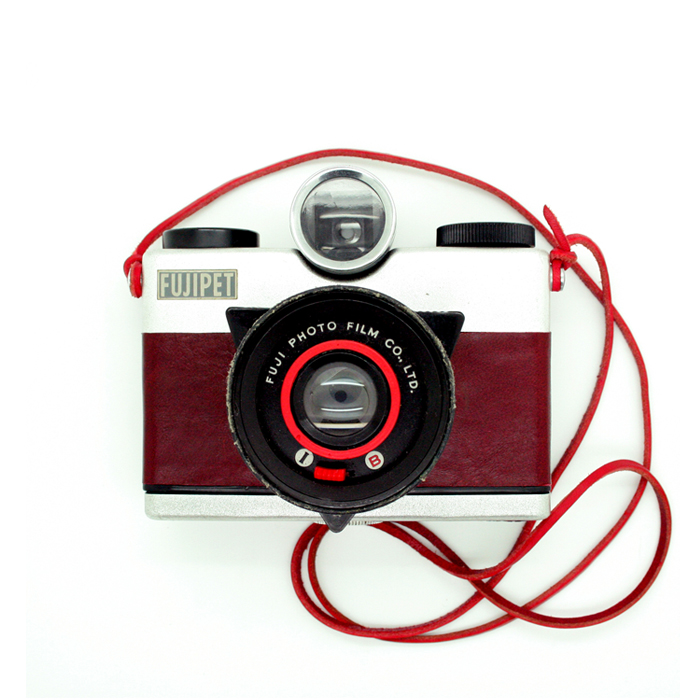 The first Fujipet which initiated my craze for the fujipet cameras. A gift from Cindy Cyanwater. Leather have changed, customised strap replaced the old ones, and a red round ring in front of the lens. The lens hood is a bit worn but I’ve decided to leave it the way it is instead of replacing it with a better one as this whole piece meant something.

With an aluminium and plastic body, this camera is often considered a “toy camera” probably due to the toylike appearance and the meniscus lens. It was made by the Fuji from 1957 to 1963 and was released for sale exclusively in Japan, marketed as a camera for the whole family.  There were minor design changes and a few different colors throughout this period. The first models had more metal components which made it heavier. though all functions were similiar.

The Fujipet Thunderbird takes 6×6 cm  exposures on 120 film. It has shutter speeds,1/50, Bulb setting and aperture are f/11, f/16 and f/22. The shutter release is of a two-lever shutter mechanism. Shutter charge (trigger on the right) cocks the shutter, while the shutter release (trigger on the left) was to open the shutter. It’s strange that it was designed in this way as the one click cameras were already available at that time, but it sure adds on to its charm now.

It is said that it was designed by Nishimura Masaki (西村雅貴), former head of Kōnan, and Tanaka Yoshio (田中芳郎), professor at the Tokyo University of Arts.